Marvel has entered into one arm’s length acquisition agreements with various vendors, to acquire over 1,444 ha of claims in the Cariboo mining division, British Columbia, with the claim block adjoining the well-known Wicheeda rare earth mineral project. The Wicheeda project was recently acquired by Defense Metals Corp. (TSX.V: DEFN) from Spectrum Mining Corporation that made the original REE discovery from drilling in 2008 & 2009.

The Wicheeda properties are located approximately 80 km northeast of the city of Prince George, and approximately 50km east of the community of Bear Lake, British Columbia; are readily accessible by all-weather gravel roads and is close to major infrastructure including power transmission lines, railway and major highways. Geologically, they are situated in the Foreland Belt and within the Rocky Mountain Trench, a major continental geologic feature. The Foreland belt contains part of a large alkaline igneous province stretching from the Canadian Cordillera to the southwestern United States and hosts several carbonatite and alkaline complexes among which the Aley (niobium), Rock Canyon (REE), and Wicheeda (REE) alkaline complexes contain the highest concentrations of Rare Earth Element minerals.Location Map

In 2010 an Airborne Geophysical Survey was conducted by Aeroquest, and soil geochemical sampling by Electric Metal on behalf of Marvel was completed (on the former Chuchinka property), over a portion of the Wicheeda North claims. The airborne geophysical program consisted of 654 line kilometers of AeroTEM helicopter-borne, time domain electromagnetic plus radiometric surveying flown at high resolution 50 meter line spacing. The survey covered a 29.4 square kilometer area and was successful in mapping the magnetic and conductive properties of the geology. Within the assessment report from 2010, AR#32361, the report contains observations and notes from Intrepid Geophysics and states “The electromagnetic data suggests that there may be an un-mapped fault in the center of the block. The magnetic data shows a subtle feature in the center of the block, slightly offset from the interpreted fault. It is recommended that the airborne survey be followed up by a geochemical survey and property scale mapping.”

According to Spectrum Mining Corporation’s paper presented at the 5th Annual Minerals South Conference & Trade Show in October 2009, (click for the 5th Annual Minerals South Conference -Cranbrook, B. C. -Abstracts); Spectrum completed a total of nineteen diamond drill holes in 2008 and 2009. In 2008, 4 BTW size holes totaling 866m intersected significant rare earth mineralization in the “Main Zone” cerium soil anomaly at Wicheeda. The best drill intercept was a 48.64 m interval in hole 2008-02 that returned 3.55% REE. In 2009, fifteen NTW diamond drill holes totaling 1824m were drilled again into the “Main Zone” from 2 new drilling platforms. Ten holes drilled on the Main Zone intersected further intervals of REE-bearing carbonatite from surface to variable depths. Significant intervals were; a 72.0 m interval that returned 2.92% REE, and a 144 m interval that returned 2.20% REE in three separate holes. (See BC Ministry of Energy, Mines and Petroleum Resources, AR30873). The 2009 drilling suggests that mineralization remains open in all directions, including to the north in the direction of the Wicheeda North claims.

All previous work is of a historical nature, and may not have been conducted under NI 43-101 standards, therefore assay results cannot necessarily be relied upon. Montoro intends to confirm the reported mineralization on its claims with the Company’s own sampling program. 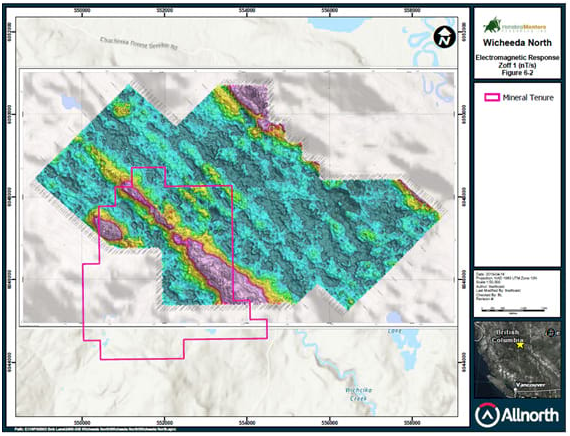 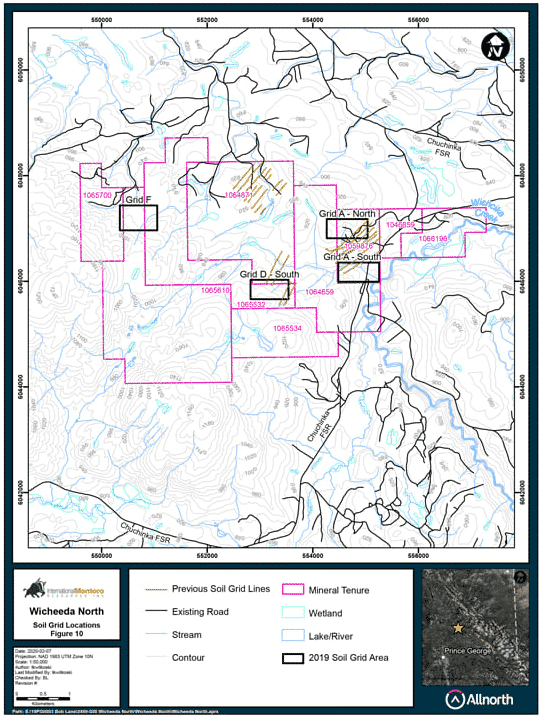