The Property is located along and within the Marmion Lake Fault Zone, approximately 13.6 kilometers (“km”) southwest along strike of Agnico Eagle’s Hammond Reef Gold Deposit. The Measured and Indicated Mineral Resources at the Hammond Reef are estimated at 208 million tonnes grading 0.67 grams/tonne gold (“g/t Au”) containing 4.5 million ounces of gold. It is believed that the recent resurgence of interest in the Atikokan gold mining camp is attributable to development of the Hammond Reef and Agnico Eagle’s recent efforts to stake or acquire mining lands proximal to its multimillion ounce deposit. Agnico Eagle reports that the massive Hammond Reef deposit is contained within a claims’ group presently amounting to 32,070 ha. 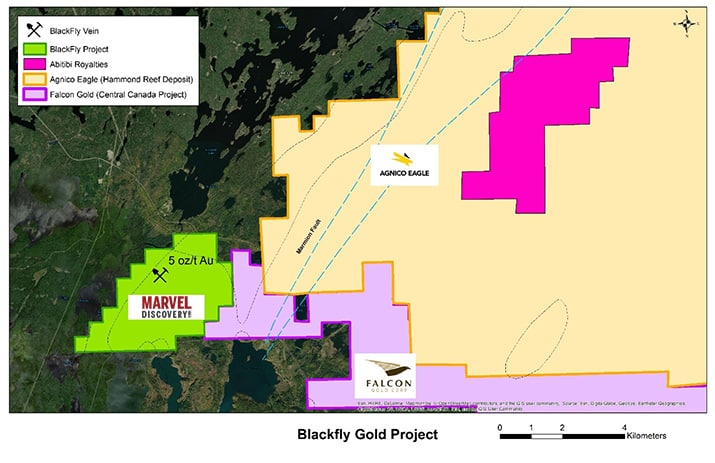 Assessment file records indicate the original Blackfly gold discovery was made in 1897, making the occurrence one of the earliest found in the Atikokan gold mining camp. The project’s 45-foot shaft was sunk in 1898 shortly after gold was discovered. Several companies have added to the database of the Property including: Rebair Gold Mines Ltd. (1945 to 1948), Steeprock Mines Ltd. (1949 and again in 1961), Aavdex Corporation (2004) and TerraX Minerals Inc. (2009 to 2012). Initial work documented by D.K. Burke in 1941 reported two gold vein shoots, a northern and a southern one. The southern shoot averaged 11.9 g/t Au over thickness of 0.33 m along a strike of 21.6 m and the northern shoot averaged 13.44 g/t Au over 0.27 m over 32 m strike length. The most recent reported work on the Property was conducted by Terra-X in 2010 to 2012 which included compilation of much of the historical reports and data, diamond drilling and surface geochemistry.

TerraX stated in its 2012 assessment report on the Blackfly gold property that, “The geology is dominated by a heterogeneous, predominantly felsic, intrusive complex, which varies from fine- to coarse-grained, and typically contains varying amounts of biotite, plagioclase and quartz. This rock was called granite in the field, although technically it is probably a tonalite. Locally, hornblende is present in significant quantities and the amount of quartz is less, so the rock is more of a quartz diorite. These rocks are interpreted to be part of the Marmion Batholith, and are intermixed with north-northeast trending, 0.25 to 100 m wide “bands” of mafic rock. Many of these “bands” are sheared on one or both margins, and it is not clear whether they have been emplaced structurally into the Marmion Batholith or whether they have intruded it (or a combination of the two). The mafic rocks vary from very fine-grained to fine/medium-grained, and from non-magnetic to strongly magnetic. Prospecting/reconnaissance of the property revealed at least four north-northeast trending lineaments with alteration/mineralization. Alteration/mineralization occurs in both granitic and mafic rocks, and at the contact between the two. Iron carbonate is the dominant alteration mineral, and can occur by itself or with variable amounts of sericite, chlorite, hematite or silicification. Pyrite may or may not be present-where pyrite is present in significant quantities, gold values tend to be higher. Zones of iron carbonatized rock can vary from 0.5 to 10 m in width. At the Blackfly shaft and for approximately 325 m to the southwest, one or more quartz±ankerite±pyrite veins occur, surrounded by strongly altered material (variably granite or mafic rock). Veins are subvertical to steeply east-dipping and may contain significant amounts of pyrite. Intense development of iron carbonate is common adjacent to the veins.

The lineament containing the Blackfly vein has alteration and mineralization traceable over a 4.4 km strike length on the property, as shown by the distribution of samples collected along it. The best gold values from this lineament occur in the area of historical work, where TerraX’s grab samples include results of 167 and 85.6 g/t Au.

To earn 100% interest in the property, Marvel Discovery Corp. has agreed to make escalating payments totaling $65,000 in cash and 500,000 Marvel shares and an additional 500,000 warrants exercisable for 2 years at a price of $0.12. The Company must also spend a cumulative total of $153,600 in exploration on the property within the 4th anniversary of signing the agreement.

The 2021 exploration program on the Project is a continuation of the work initiated in 2020 that included a compilation of historical information and reports and completion of its high-resolution airborne magnetics and time-domain electromagnetic data collection over 203 line-kilometers at 100m spacing.  Several geophysical anomalies were identified and targets for follow-up were recommended.  Marvel’s geological team has begun the 2021 program work of prospecting, bedrock mapping and rock sampling.  Trenching is planned for further definition of the gold mineralization associated with the known anomalies and geological structures. Diamond drilling is budgeted to commence in the summer field season with 16 drill holes.

The Marvel geological team has conducted the initial prospecting, field mapping and sampling, and has now received the first batch of 78 assays.  A further 180 samples have been submitted for analyses at Actlabs of Thunder Bay, Ontario. 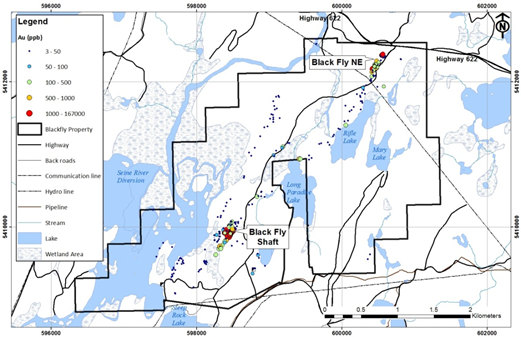 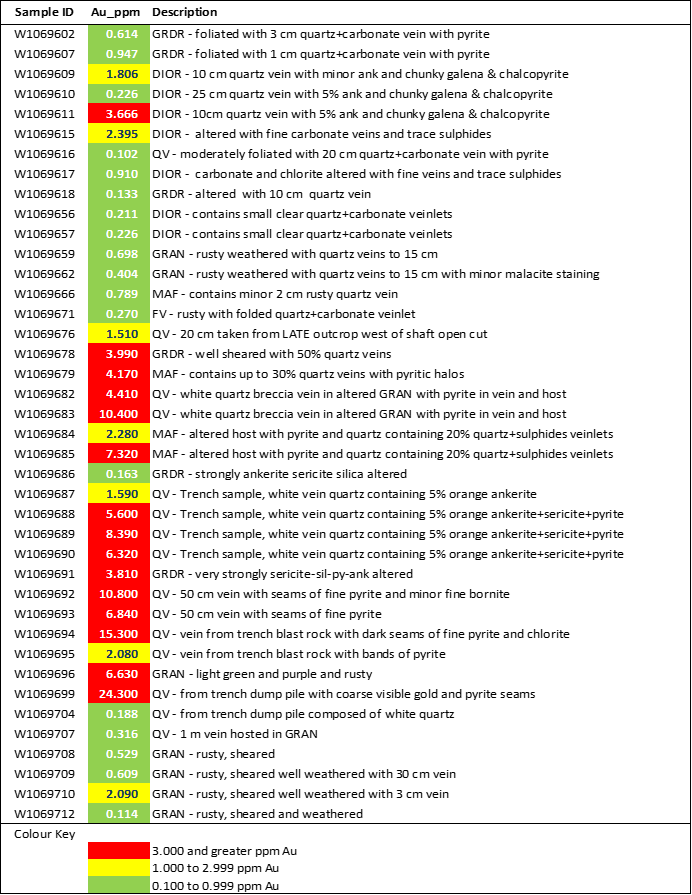 The Marvel geological team has conducted the initial prospecting, field mapping and sampling, and has now received another 62 assays for a total so far of 144 results.  A further 204 samples have been submitted for analyses at Actlabs of Thunder Bay, Ontario. 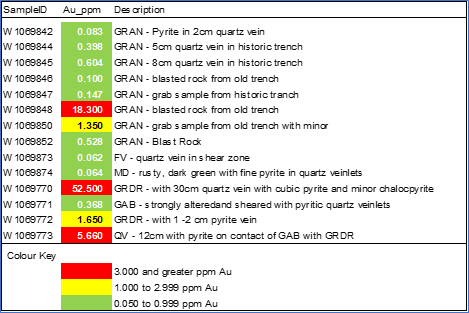 The Marvel geological team has conducted the initial prospecting, field mapping and sampling, and started trench sampling.  A total of 303 samples were submitted for analyses at Actlabs of Thunder Bay, Ontario. Surface samples taken in recent trenching are pending.

Third round of 2021 surface sample highlights:

The first 3 drill holes are now complete and core logging is underway.  The field team believes that gold zones were reached in each hole with visible gold found in a vein intersected at a depth of 8m in drill hole BF21-15. 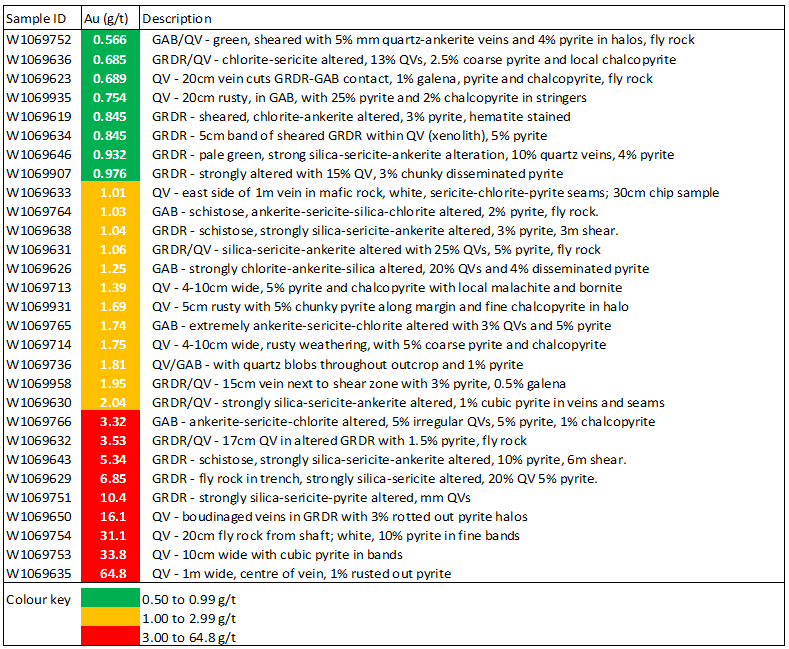 Gold mineralization on the Blackfly Gold Project is clearly being presented in several hosts and with varied mineralized styles, ranging from traditional gold in quartz veins to gold occurring in highly altered host rocks.  Mineralization is developed within altered northeast trending, steeply dipping structures that obliquely cut the regional foliation.

Samples collected in 2021 were analyzed by Activation Laboratories, an ISO/IEC 17025:2017 accredited facility.  Samples were collected in the field and transported and stored in Falcon’s secure facility located near Atikokan, Ontario until their transportation by Falcon personnel to Activation Laboratories’ sample preparation facility in Thunder Bay, Ontario. Gold was analyzed by fire assay with an Atomic Absorption finish; samples with >5 g/t Au were re-analyzed by fire assay with gravimetric finish. Certified gold reference standards and blanks were regularly inserted into the sample stream. Gold results herein varied from below detection to 52.50 g/t. No quality control/quality assurance issues were noted with the results reported herein.