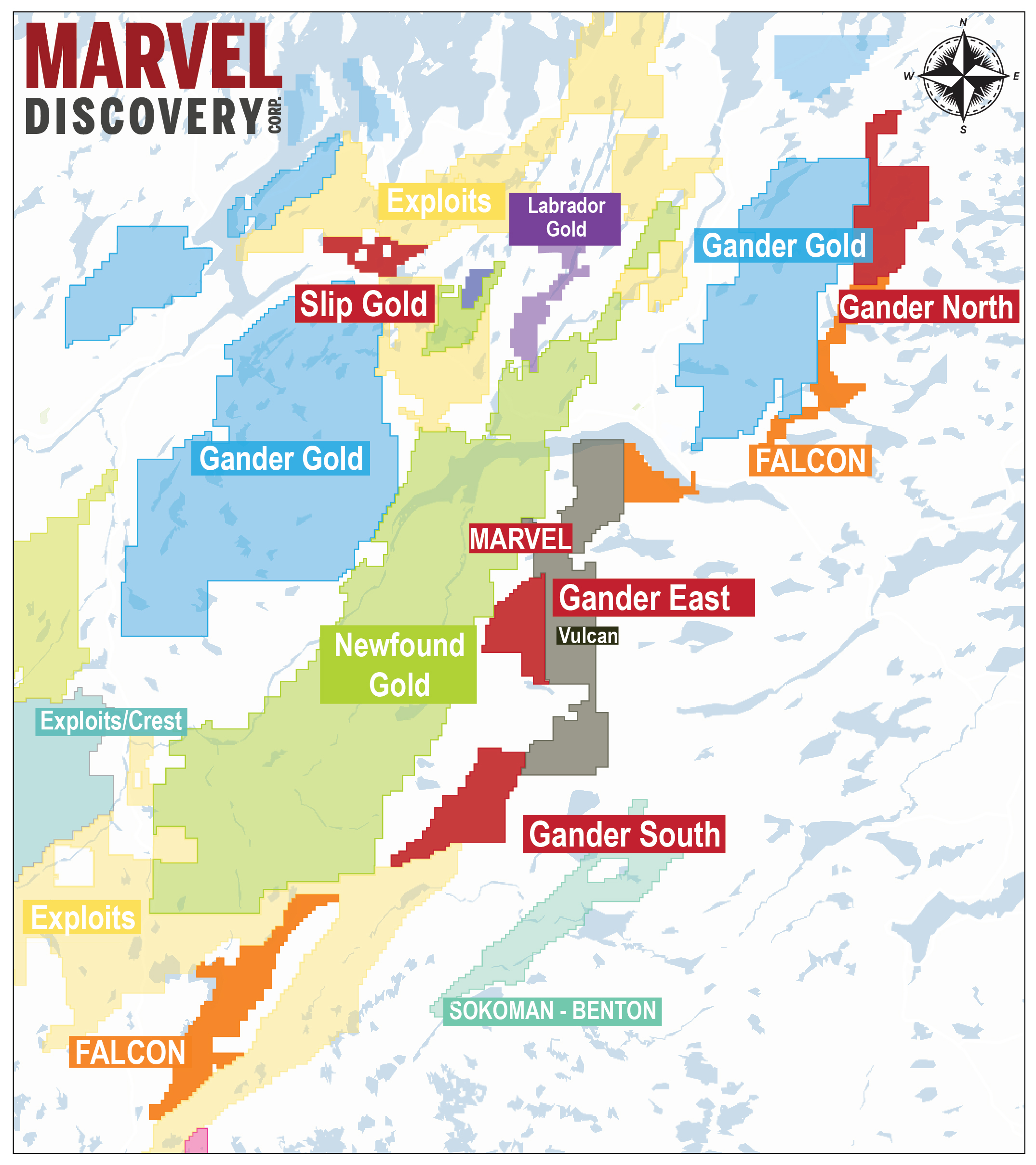 The complexities evident within this dataset reveal structural features consistent with those of extensive fault and secondary shear zones and with fold structural patterns evident that were not resolvable with pre-existing regional datasets (Figure 2).  These fault structures may be splay zones from the Grub-Line which is located due East of the property boundary, and these are highly favorable for gold mineralization (Figure 3). The secondary and third order structures are evident as linear magnetic features that crosscut the structural corridors. Also present are magnetic features more consistent with volcanic intrusions than altered sedimentary rocks, with such features favorable for Cu-Pb-Zn deposits commonly found in the Buchans area to the west. A detailed structural study has commenced and will be used as a basis to direct field crews for ground follow-up which will include soil geochemistry surveys, prospecting, and mapping. 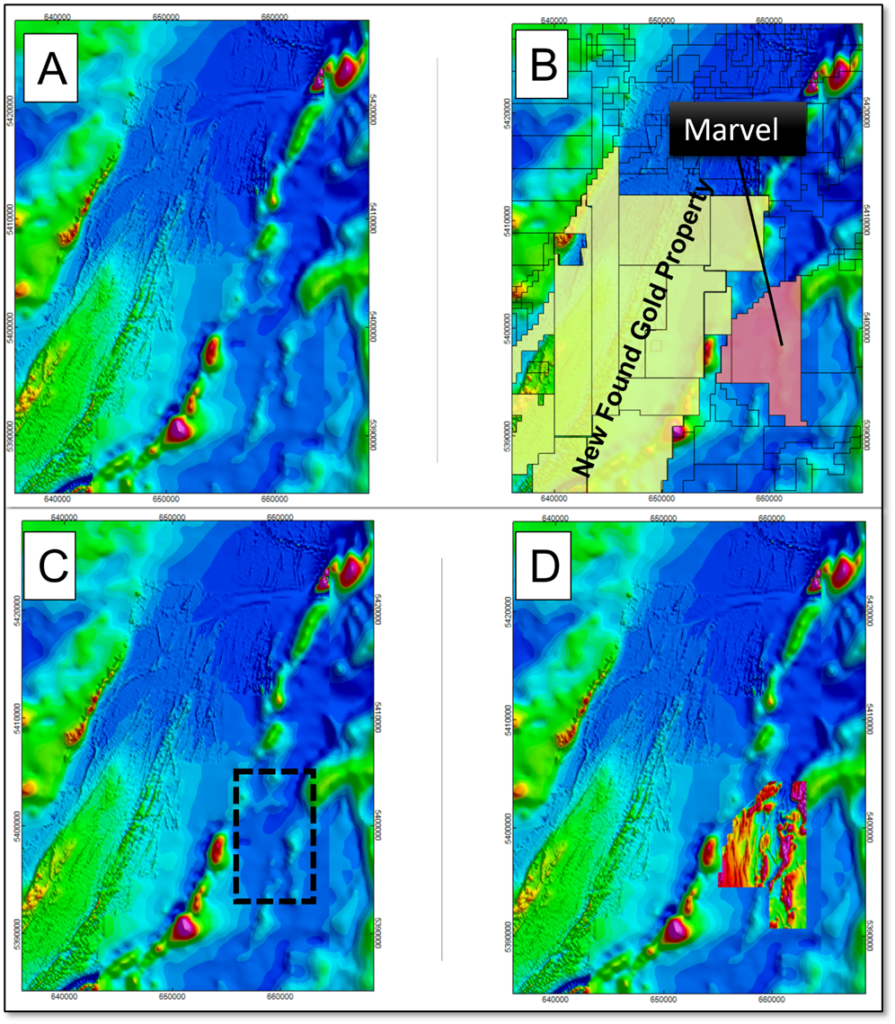 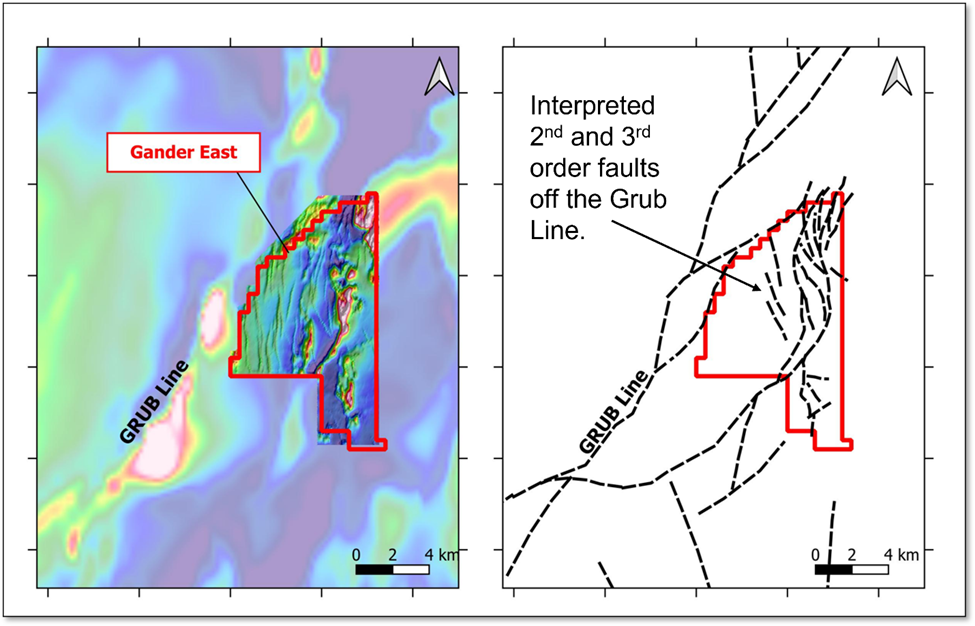 The Gander North (478 claims totaling 11,875 hectares) located 25 kilometers due East of Newfound Gold’s Queensway Project. Gander North is contiguous to Sassy Resources Gander North Project, who’s management team includes Shawn Ryan. Shawn is a global leader in his field where his prospecting instincts have been instrumental in finding new multi-million gold deposits and triggering gold rushes in both the Yukon and Newfoundland.

Northeast trending structural lineaments first recognized by Sassy Resources to the immediate southeast are interpreted to continue onto the Property. An interpretation of the regional magnetics shows NNE trending, ophiolite bearing thrust faults are cross-cut by a series of brittle NE trending fault-fractures, which indicate a regional setting similar to that to the highly prospective eastern Exploits Subzone. Gold mineralization models along the Exploits Subzone are based on analogous structural settings to those at Fosterville in Victoria, Australia. 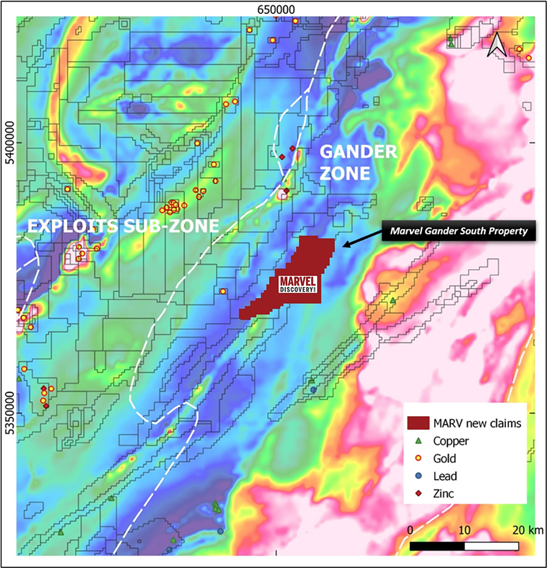 The Property lies proximal to the Dog Bay-Appleton-Grub Line fault system, a crustal scale fault zone that extends from the north coast of Newfoundland 200km southwest through Gander. Structural corridors in the central Newfoundland are intimately associated with recent gold discoveries including the Marathon Gold’s Valentine Gold Project which hosts 6.0 million ounces of gold (https://marathon-gold.com/valentine-gold-project/).

The Gander South Property lies within the Gander Zone northeast along strike from the Exploits Subzone boundary where gold mineralization models are based on analogous structural settings to those at Fosterville in Victoria, Australia (https://exploitsdiscovery.com/projects/). The property lies within a domain of ambiguous geophysical signature that suggests the zone boundaries may be more complicated than regional maps indicate.

Preliminary structural interpretation shows the area is characterized by major northeast-trending structures, which parallel the Dog Bay-Appleton-Grub Line fault system and can be traced for approximately 35 km to the southwest and 60 km to the northeast where historical gold occurrences (e.g. Star Track, West Tower, Wing Pond) are observed in proximity to regional-scale granites of the Gander Zone.

MARVEL ACQUIRES 10,250 HECTARES, BETWEEN THE EXPLOITS SUBZONE AND THE GANDER ZONE – NEWFOUNDLAND